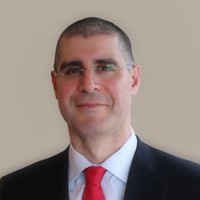 Chair of the Board

John Pyrovolakis is the founder and CEO of Innovation Accelerator, created in 2008 as the private side of a public private partnership. Innovation Accelerator has developed a new innovation model that has been credited in the 2012 PCAST report for attracting $200M into IA’s portfolio of companies. John also founded the Innovation Accelerator Foundation (IAF), a non-profit organization committed to nourishing innovation beyond the lab. Previously, John worked as a banker for Jesup & Lamont Securities, and did diligence on technology investment targets for large corporations such as Mastercard, Suntrust Bank, and the US Department of Education. John founded Collegescape, an online college admissions system, out of the 1996 MIT Entrepreneurship Competition, and sold it two years later to the Thomson Corporation (TSX: “TOC”), a large multinational conglomerate. John is a graduate of New York University with a triple major in mathematics, philosophy, and computer science. He proceeded to the doctoral program on teaching fellowship and scholarship at the Massachusetts Institute of Technology (MIT) with a focus on mathematical logic. At MIT, John did research on automated theorem proving at the Artificial Intelligence Laboratory. John was also a Teaching Fellow at Harvard, where he taught “Space, Time and Motion” at the Harvard-Smithsonian Astrophysics Laboratory, and won the Derek Bok Prize for teaching excellence.